We’re delighted to introduce Thomas Coffe. Thomas is from Beaumont-sur-Leze in the South of France. He is a journeyman blacksmith apprenticed to the Compagnon-du-devoir, also know as the Compagnons du Tour de France. (NB Only follow that link if your French is up to scratch…. and it’s nothing to do with the famous cycle race!) 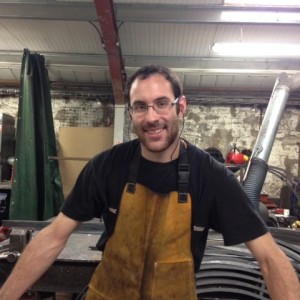 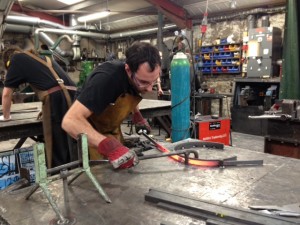 The Compagnons du Tour de France is a French organization of craftsmen and artisans dating from the Middle Ages. The aim of the Compagnon guild is to train young men and women in traditional trades by acquiring experience trough travelling in various workshops throughout France and internationally too. Their traditional, technical education includes taking a tour doing apprenticeships with masters. A quick search on Wikipedia reveals this explanation…

“The word compagnon (companion) is derived from the Old French compaignon, a person with whom one breaks bread. For a young man or young woman today, the compagnonnage is a traditional way to learn a trade while developing character by experiencing community life and travelling. Until recently, the compagnons were all male. Today, they can be found in 49 countries across five continents, practising many different trades.”

We are delighted that Thomas has been chosen to come and spend some time learning under the expert guidance of the Ironart team. He’ll be here in Bath for one year, and we’ll track his progress and projects here on the blog, so watch this space for more news!