Gareth Cryer, one of the newest blacksmiths to join our team has been lucky enough to be part of the Princes Foundation Building Craft Programme over the last 8 months. The programme involved a 3-month live-build at Dumfries House in Scotland with a team of other craftspeople including stonemasons, carpenters, bricklayers, thatchers and blacksmiths who were all developing their heritage skills. As part of the programme, Gareth had placements at forges across the UK including his time with us at Ironart. We are as active as we can be in fostering these types of placement supporting and developing people with the craft. In running this programme, The Princes Foundation is doing great work to develop crafts professional’s skills in the UK and enable better building practice and conservation of heritage sites across the country. We are really keen to support this kind of enterprise.  Congratulations, to Gareth for completing this inspirational programme. We look forward to welcoming Jeremy Cash, our latest placement from the foundation, this November. See below some images of the projects Gareth worked on the programme.

Two years ago, the main Rood Screen at St John the Evangelist in Bath was fully conserved and re-gilded.  Since then we have been commissioned to undertake the conservation of the beautifully made traditional iron folding gates on either side of the Rood Screen. We have really enjoyed having the opportunity to work on such a stunning piece of local heritage ironwork. The gates were originally made in 1905 and each gate has slightly different designs and motifs. The gates were covered in an old shellac lacquer which has been removed along with minor corrosion and the one or two missing parts were hand-forged and replaced and then repainted in a matt black paint with gilded highlights to reflect similar gilding on the rood screen.

There is a scattering of shrapnel pockmarks from when the neighbouring presbytery was badly damaged by a bomb in the Baedeker raids of 1942.  Because of the bomb damage, one of the gates had lowered which meant we had to extend the hinge journal and heel pivot, allowing the renovated lockboxes and latch to line up nicely and work as they no doubt originally did.  Whilst odd missing parts were replaced, the shrapnel damage was left alone, a historical marker left for future generations to find.

It was great to discover more about the history of the building and the ironwork through this renovation project. Click to see this film of St John’s the Evangelist Church after being bombed in some rare documentary footage from the BFI library archive that was found by Martin Smith one of the blacksmithing team who worked on the conservation of the gates. Martin was curious to find out more about the bombing that impacted the heritage ironwork they were working to conserve.

These pictures tell the story of an intriguing restoration project we have in the workshop at the moment.We have been commissioned by the Bartlett Street Antiques Centre in Bath to survey,  dismantle and restore this beautiful 6m wide overthrow which has, for many years been hanging high over Bartlett Street, a picturesque pedestrian side street in Georgian Bath’s main shopping district.

We are still not sure exactly how old this lovely wrought iron overthrow is but probably late 19th Century. Martin Smith is overseeing the restoration of the whole piece, carefully cataloguing each section and ensuring the appropriate repairs are made at each stage of the process.  Stacey Hibberd, Cecilie Robinson and Adrian Booth are all assisting Martin in the restoration. It’s such a beautiful piece of original wrought ironwork and our whole team appreciate the level of craftsmanship and care that went into it’s making. We can only wonder how many million people have strolled underneath this overthrow without even noticing it! When restored and back in situ the gantry will incorporate some new, bold lettering to catch the eye – “Bartlett St Quarter” – more pics to follow as work progresses…

We have just installed a beautiful gothic gate in Bristol. We have already posted a blog piece about the making of this gate while it was in the workshop. 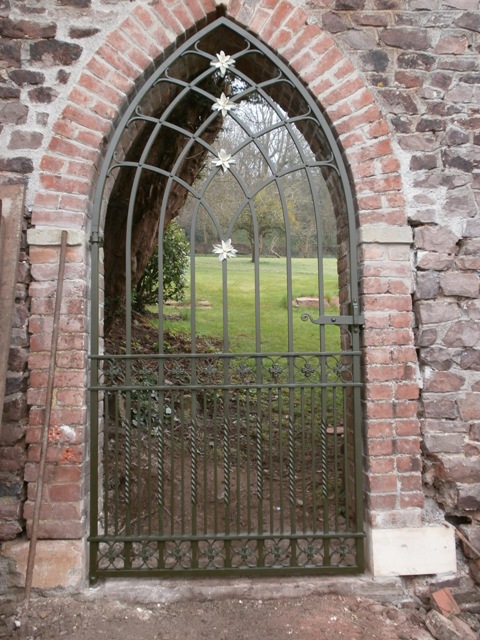 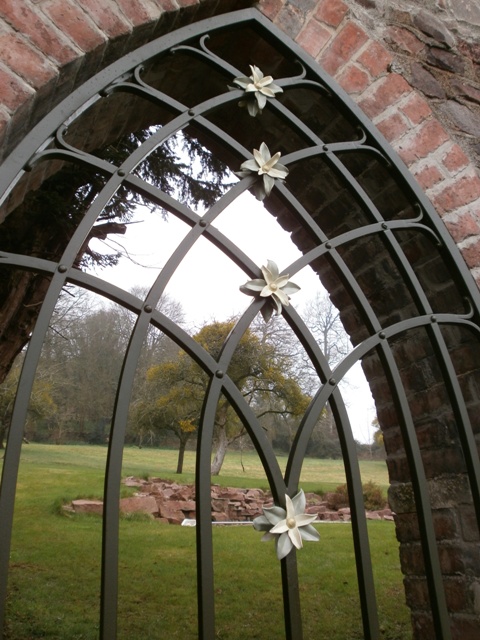 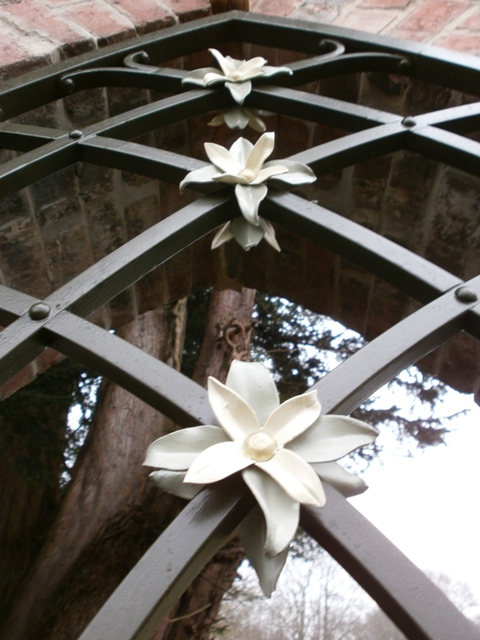 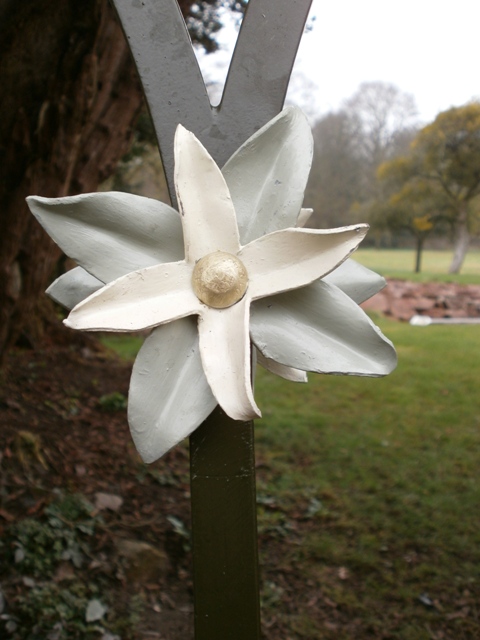 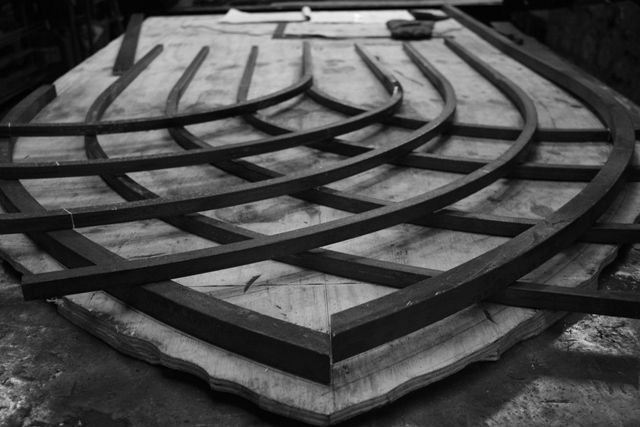 The Ironart workshops have been a positive hive of activity, but apologies for the long silence on the blog front, there has been a great deal going on in the office too!

The Ironart team have created a beautiful single gothic-style wrought iron gate for a private customer in Bristol. This heavy metal gate has been predominantly made using traditional metalworking techniques and will form the entrance to the walled garden of a Georgian property.

It features cast lead detailing (see images below) for which Martin had to recreate the mould and will eventually incorporate pretty leaf detailing. The bars incorporate barley twists which Jason made by hand, these bars feed through punched straps.  Jason created the halving joins using a micro cutting disk and a plasma cutter. 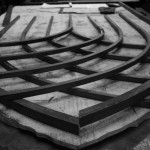 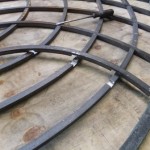 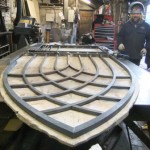 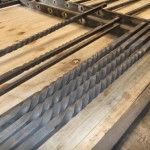 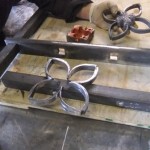 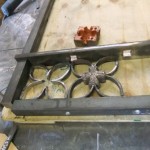 We’ve just installed a unique pair of wrought iron glazed entrance gates on a large private house in the South West. This was a prestigious and very exciting commission as these gates were made by the team here at Ironart using genuine recycled puddled wrought iron and with traditional metalworking techniques.  Andy designed the gates in collaboration with the architects, and Jason led the team who realised the project here in the Ironart workshops. 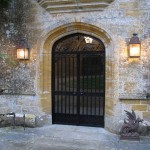 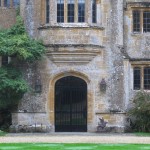 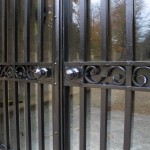 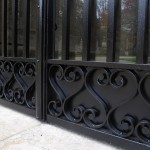 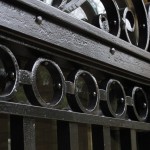 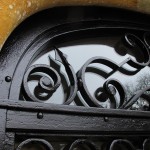 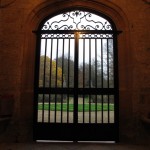 Dom and Jason were bending the frame for a curved overthrow this week. They were working with 38mm square bar. First they created a ‘former’ which they welded to the bench. They heated the component in the forge and shaped it a piece at a time. This was time-consuming and hot work! The bar could only be heated 14 inches per time – it took several hours, but the results were very satisfying. Read more Ironart blogs about the making of these traditional gates. 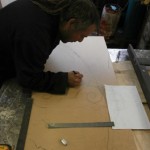 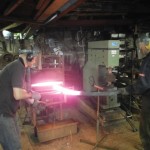 Jason and Dom heating the 38mm bar in the forge 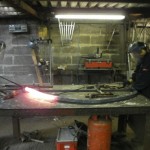 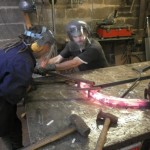 Shaping the red hot metal around the ‘former’

These scrolls belong to a beautiful listed Georgian house in Camden Crescent, Bath. Ironart have been commissioned to restore the ironwork on the face of the building.

These images show the scrolls being flame cleaned to remove the old paint. 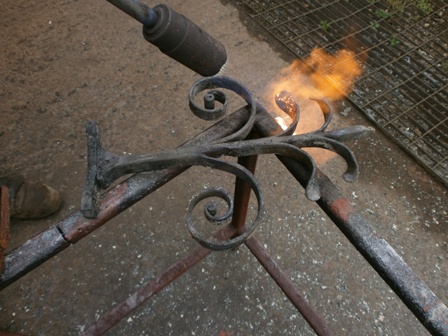 Flame-cleaning as part of the restoration of historic ironwork 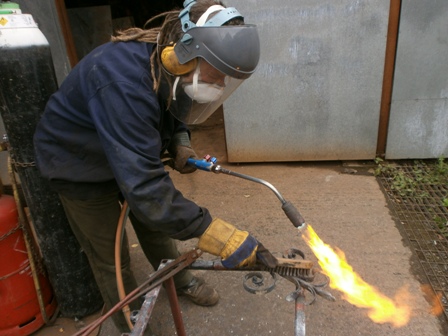