We hosted an Historic Ironwork CPD event on Tuesday 5th May here in Larkhall and were joined by 70 architects, surveyors, landscape designers and heritage professionals. The Ironart team fired up the forges and demonstrated leaf-making, firewelding techniques, finial making and scrollwork. Some of our blacksmiths were on hand to answer questions and talk about the traditional metalworking techniques that we specialise in here at Ironart, and the restoration projects we have enjoyed in recent years.

Andy gave a 45 minute talk entitled “An introduction to conservation, care and repair of historic ironwork” which (despite one minor technical hitch!) was well received by everyone who came along. A powerpoint copy of this talk is available, please contact us if you would like a link to the file, we are happy to share it.

If you would like to be first in the queue to hear about future events like this at Ironart, please sign up to our e-newsletter here.

Exciting Ironart newsflash! We have a shiny new Brompton bike in zingy tangarine orange to whizz in and out of Bath from our base camp here in Larkhall. No more sitting for hours on the London Road for us, especially with the announcement that there will soon be a new cycle lane along the A4 in Bath. Whoop whoop!

Loving the pics of Luke and Jason discussing the finer points of Brompton assembly… with much head scratching and amusement all round. Give us a hoot and a wave when we fly past you in those traffic jams!

We are hosting two open days this coming bank holiday weekend here at Ironart and would love to see you.

On Saturday 2nd May from 10am – 3pm our workshops will be open as part of the Larkhall Festival weekend. 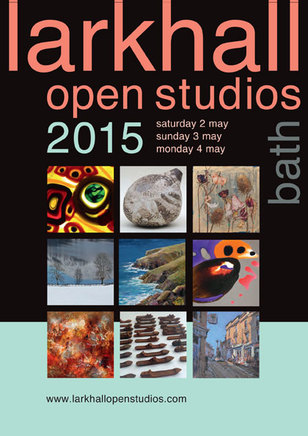 We’re taking part in the Larkhall Open studios arts trail – an intriguing walking trail featuring the workshops and studios of 18 artists and groups in this area, please follow this link for a map of the trail. It’s completely free and we would love to see you.

Then on Tuesday 5th May  we are opening the workshop doors for an educational event, Andy Thearle (owner of Ironart) will be giving a short, informative lecture entitled: “An introduction to Conservation, Care and Repair of Historic Ironwork.” 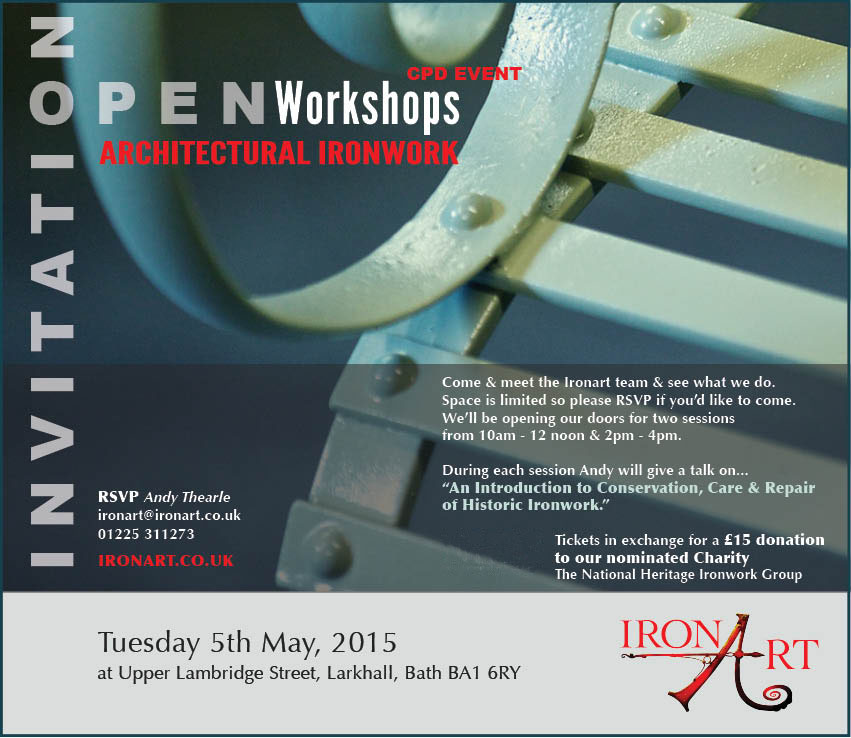 This event is also also free*, but booking is essential as space is limited in the workshop. There are two sessions. Choose from 10am- 12 noon or from 2pm-4pm. There is currently some space left in both sessions so please let us know if you’d like to come along. Call 01225 311273 or email ironart@ironart.co.uk

We are delighted to have been commissioned to restore the lovely main gates and other ironwork from historic Burwalls House in Bristol.

Burwalls Estate is located in Leigh Woods, a residential suburb lying approximately 2.5 miles west of the city and overlooking Bristol’s iconic landmark Clifton Suspension bridge. The estate comprises of a Grade II listed Jacobean baronial style house built in 1872 by Joseph Leech a local entrepreneur and owner of the Bristol Times and Mirror, alongside a range of annexe buildings and a detached lodge.

Burwalls was requisitioned by the War Office in 1939 and used as the HQ of the Heavy Anti Aircraft Regiment, before being purchased by the University of Bristol in 1948.

Here are some pics of the gates arriving earlier this week – more news on this when we start work on them.

So much fun this morning at the Blacksmithing workshop run by Martin Smith here in our Larkhall forge.

The students picked it up incredibly quickly and after a morning of scrollmaking and twisting bars they went straight into a session of making toasting forks, letters and knives! Very impressive stuff.

On Thursday the entire team downed tools and headed off on a sunny day trip to Wolverhampton! Andy wanted to introduce the Ironart team to some of our suppliers, to give everyone an insight into different aspects of the architectural metalwork “supply chain” and how it all works.

First we visited Legg Brothers steel rolling mill and soaked up the atmosphere inside their vast workshop. An awe-inspiring series of complex industrial machinery and some seriously heavy-duty manpower in full rhythmical production. It was an impressive sight.

Next we headed over to the fascinating Aladdin’s cave that is Barr and Grosvenor casting foundry on Jenner Street, where we met with Dominic and Lynn Grosvenor and their team for a full tour of their casting workshop. Dominic is a passionate advocate of traditional casting techniques and it was an absolute pleasure to meet him and a real treat to see his team of craftsmen at work in this unique environment. They kindly topped off our visit with a delicious lunch for which we were really grateful.

Finally our day ended with a whistle-stop tour of Edward Howell Galvanizing plant in Wolverhampton courtesy of Jim Lindsay and Kevin Addiss, where we all gazed in wonder at their enormous warehouses full of acid dip-baths and vats of hot moulten zinc. They were hard at work dipping rack upon rack of metal palisade fence posts…we’ll never look at palisade fencing again without remembering this experience!

Thank you so much to our generous hosts for giving up their time and energy to enlighten us, we absolutely loved it!