The Lower Lodge Gateway (or Gatehouse) was once the main entrance to impressive Ashton Court in Bristol. Built in c. 1805 it was constructed at its location to allow a picturesque carriage drive from the City of Bristol to Ashton Court’s main west front.

Having been in a state of dilapidation for some time, the Lower Lodge gates are now part of a £1m Bristol Buildings Preservation Trust Project which will see the restoration and conversion of the building into the Bower Ashton Gateway Centre, a community hub and learning centre to be managed by Ashton Park School.

For us at Ironart, restoring these gates has been another fantastic project to be involved in…and not without its challenges!

Due to logistical issues, the 15ft x 15ft double gates set within the gatehouse itself couldn’t be moved so the team was required to restore them in situ – a very restricted space. Made of wrought iron in c. 1875 we think the gates were originally transported to the site in sections for assembly.

“Over the years the gates have suffered quite severe damage including vehicle damage. The right hand leaf looking out on to the road was seriously distorted and the level of rust-jacking to the overall structure was widespread. This was particularly noticeable on the finial cresting which was also severely bent, with cracks clearly visible on the left side. The top and bottom rails were also in poor condition. The lock boxes were severely corroded and broken; the springs were snapped and internals bent, again probably due to vehicle damage. The drop bolt and keep were in need of repair as the keep was no longer retaining the bolt.”

Washing down the gates to remove the top layer of dirt enabled us to see the scale of the job. Rust-removal was the next key stage which once completed, was followed by wire-brushing back to the clean surface.

In terms of the individual elements, the broken lock box was sent to Keith Carrier & Son of Birmingham, for repair. New lock box cover plates were made at Ironart’s Larkhall workshop and the keep boxes repaired retaining  as much of the original material as possible.

The drop bolt once removed was brought back to the workshop to be straightened and a new tension-spring made and fitted.

The finial cresting of spears and sweeps was removed from the top bar and brought back to the workshop for the rust-jacking to be removed. Each spear, sweep and ring detail was individually and carefully cleaned out and filled where needed. Repairs were also made to the bottom rail.

Once primed, the gates were undercoated and top-coated in a dark grey paint. A beautiful pair of 19th Century gates restored and ready for the next chapter in their story… 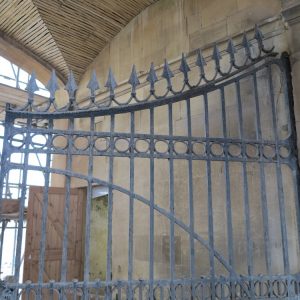 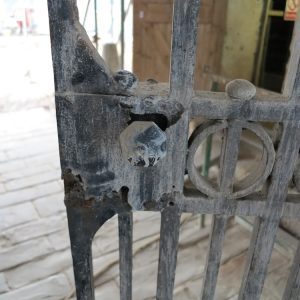 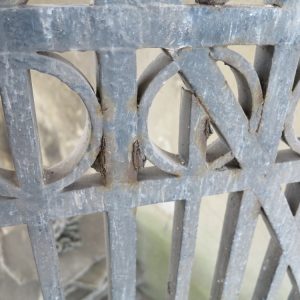 Rust-jacking in between ring detail and missing buns 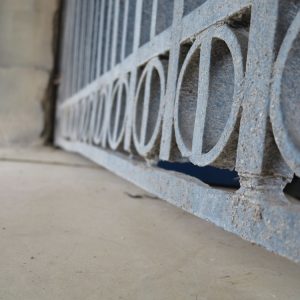 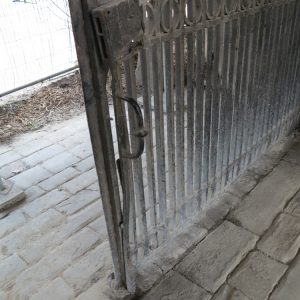 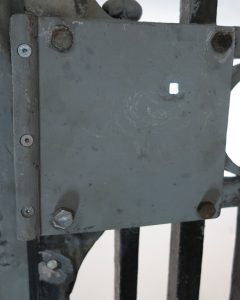 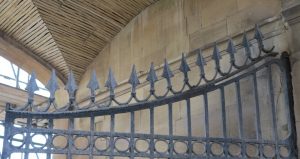 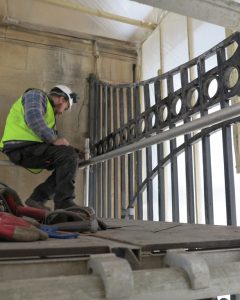 Individually cleaning out the ring detail 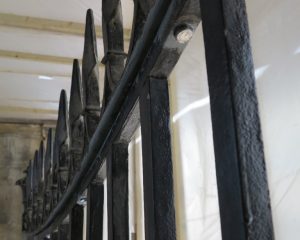 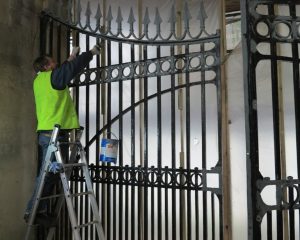