Adrian and Dom have just put the finishing touches to this wondrous double bed frame for a client in Salisbury.  This was an original design by Andy Thearle, incorporating plenty of lovely forging and collaring details – it took many, many hours of painstaking work to complete but it has been well worth the effort! The neat bedside tables were designed to match the bed, and will be finished off with slump glass shelves. The bed is just about to go into the paint shop for a satin black paint finish.

Bespoke forged beds are not ideal if you are on a tight budget, but a handmade piece of art like this will hold it’s value and give you something to hand on to the next generation. We do love this type of forgework, so if you have an idea in mind and want to discuss it with Andy or one of the team, please get in touch. 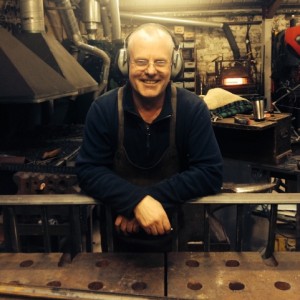 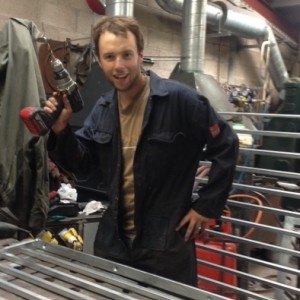 During January Martin Smith and Paul Ashmore worked on the restoration of an unusual kitchen garden gate from Cothelstone in the foothills of the Quantocks. The Ironart team was also commissioned to follow the original design and make up three new, replica gates to replace those that have long since gone missing from the walled garden, a challenge which we gratefully accepted.

The original gate is an impressive, heavy wrought iron example of complex, traditional construction, featuring tenon joints and curved punched rails and elegant forging. By Martin’s estimation the gate dates from c. 1820 and was without doubt specifically commissioned for the walled kitchen garden it graces. This was a really interesting and challenging project for the Ironart team who fully appreciated the craftsmanship and high level of precision with which it had been made.
Because the assembly of the original gate was so complex the team chose not to remove any of the component parts for cleaning. The extensive corrosion between joints had resulted in a great deal of rust jacking and failure of the tenon joints, all of which had to be meticulously cleaned by hand with brushes, chisels and scrapers. Any replacement parts were made by the team using wrought iron to retain the structural integrity of the gate. The original spring latch was reinstated as a working feature and a new stainless steel mortice lock was enclosed within a wrought iron box in sympathy with the original design. (For those that are interested, the main construction of this original gate was 1 1/4″ stiles, 3/4″ main bars and 2″ x 1/2″ rails – both straight and curved.)

The replica gates were tackled by one of our highly experienced blacksmith’s Jason Balchin, understudied by NADFAS intern Cecilie Robinson and Adrian Booth.
Jason’s first challenge was to scale down the dimensions of the original gate and create templates for the three new gates to fill the apertures in the wall. The new gates not only faithfully followed the design of the original, but were also traditionally made, with tenons, mechanical joints and firewelded features. The central diamond detail was made up of fire-welded joints and halving joins. All the ends of the rails had forged tenons which were heated up and riveted into countersunk holes on the stiles. It’s important to point out that these new gates were constructed using modern materials – ie: metric mild steel instead of imperial wrought iron.
Due to the complexity of this project the team had to assemble them three times during the making process to ensure that all dimensions and calculations had been accurately achieved.
Prior to assembly all the mating joints and tenons were flooded with a zinc rich primer before being sent to a local firm for shot blasting and hot zinc spraying and priming. Once this has been done they’ll be ready for their final paint application.

Jason Balchin says of this project: “It was really enjoyable making these complex, technical gates and a pleasure to work with Adrian on our first big project together – he did a really great job.”