Today the Ironart team welcomed Judith Quiney, the Promotions and Marketing Director at NADFAS. Judith and Jane visited our workshop to film James and Cecilie for the NADFAS website and AGM.  Two years ago, Ironart was generously awarded two Patricia Fay memorial grants towards an apprenticeship for James Cuthbertson, and more recently a restoration internship for Cecilie Robinson. The short films following their progress will be edited and released in May. Our thanks again to Karen, Judith and the entire team at NADFAS for their support.

The National Association of Decorative & Fine Arts Societies (NADFAS) works to advance decorative and fine arts education and appreciation, alongside promoting the conservation of our artistic heritage. They support over 360 local Societies across the country, in mainland Europe and New Zealand. 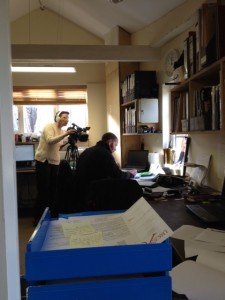 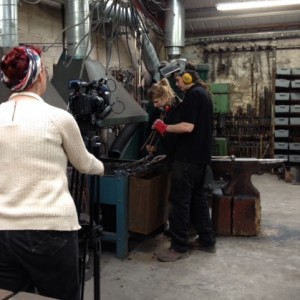 Amazingly James, Ironart’s apprentice ornamental metalworker,  has been here for one whole year this month. He has fitted into the team so well it’s hard to remember what life was like without him. He is such an asset to Ironart both in terms of his metalworking skills, his common-sense approach to everything and his ability to make us all laugh and see the funny side of even the most depressing situation!

Since we last blogged about James’ apprenticeship he’s been involved with a vast number of key projects here at Ironart. He’s been out on site fitting with Andy, Luke and Jason quite a bit. Most notably a huge set of gates which we made for a private house in Orpington, and an internal balustrade in London. Both were tricky, technical projects. Back in the Ironart workshops in Bath he’s been assembling garden furniture and assisting the other members of the Ironart team with everything from garden benches to gothic chandeliers and the beautiful, contemporary meadow gate.

James is now into his seventh week of his ten week course at Hereford College. (He’s doing the Blacksmithing Design & Forgeworks skills course on a block-release basis). Just recently they’ve been studying repoussee under the expertise of reknowned artist blacksmith and lecturer at Hereford Paul Allen.

As ever we are extremely grateful to NADFAS, the National Association of Decorative and Fine Arts Societies. Without their support this apprenticeship simply would not have been achievable. 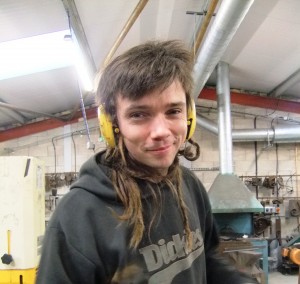 ps: We just heard that James passed his college maths exam with 100% – Norton Radstock College have never had a student pass with such a high mark – they are all amazed. James Cuthbertson you are a man of many talents and we salute you!