Ironart featured in the press this week when this pair of handsome lanterns were unveiled by the Bishop of Taunton, Peter Maurice, at Christ Church on Julian Road in Bath. Now Bath and The Bath Chronicle both picked up on the story because, once stripped of their paint, the lanterns were found to be peppered with bullet holes!

The team at Ironart had been commissioned by the trustees of Christ Church to restore the lanterns earlier in 2013 thanks to a generous legacy left by a Christ Church parishioner. The lanterns are of painted copper construction with traditionally made wrought iron brackets. Martin Smith who is head of restoration here at Ironart describes their style as ‘high gothic’ and dates them somewhere between 1860 – 1880. They were originally gas lanterns, and almost certainly base mounted, they had been modified from their use elsewhere to grace the front of the church. One of the lanterns has a series of bullet holes which could not have happened while they were hanging at the church due to their location on the copper crown – nobody seems to know where they came from! The ornate wrought iron brackets with which they were mounted had also been adapted, Martin believes they may have originally formed part of an overthrow-type structure. The only other similar gas lanterns Martin has seen were in Westminster, London.

Martin worked on the full restoration of these historic lanterns with National Heritage Ironwork (NHIG) student Paul Ashmore who was on a placement at Ironart for several months over the summer.  Paul and Martin paintstakingly disassembled the lanterns and made a full assessment on it’s condition and the method of repair, before restoring them to their former glory. Please follow THIS LINK to a full gallery of images of this restoration project.

If you have any questions about this or other similar projects, or have a lantern yourself and would like to discuss it’s repair – please get in touch. 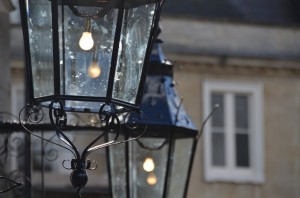 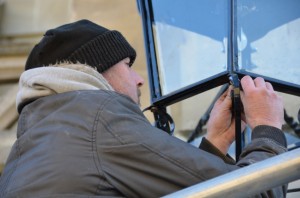