An update on the four weathervanes from Evesham Abbey Bell Tower which came in to us for restoration late last year. Click here for the background to this fascinating restoration project.

Brought back to our Larkhall workshop once dismantled from the heady heights of the bell tower, the four pinnacles were carefully flame cleaned. Several minor repairs were made by the restoration team, which included replacement of a number of missing crown crosses, rudimentary straightening of cardinal points, cleaning out areas of rust-jacking before being painted and then gilded.

You’ll recall that part of the brief from Sally Strachey Conservation was to re-design the bearing system which had corroded and no longer allowed the weathervanes to rotate. The original bearing system centred around an exposed bearing surface which required regular maintenance.  To try and ensure a lower maintenance solution, the new bearing specification involved using sealed bearings with machined weather caps at the top and bottom. 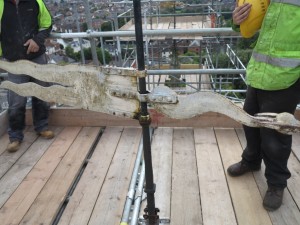 Original bearing system and condition of gryphon at point of removal 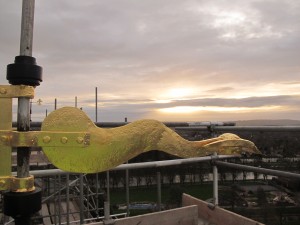 The four vanes were quite literally a stunning sight once re-gilded. Returned to their home in December 2015 we hope they will continue to do their job for many many more years to come! 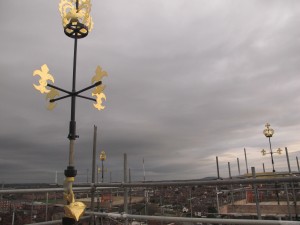 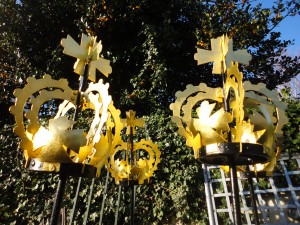 More pics from our work on the Evesham Abbey weathervanes – follow this link to our recent post about this interesting restoration project.

Martin Smith and James Cuthbertson went to Evesham  last week to dismantle the first of the four weathervanes. Working high on the scaffolding, they started with hand tools – thankfully the first one came apart easily, apart from the bottom section of the spindle which was very well secured and had possibly been cast into bronze assembly.  James and Martin unbolted the cardinal points and the crown from the top of the spindle, which then allowed them to remove the griffon detail. 65 years of weather had corroded and sealed this firmly on, so the two men winched up a gas set and heated the socket at the base to loosen it up. This was a bit nervewracking because the base of spindle also forms the clamps around the delicate stone pinnacles (see pictures on our previous blog post).Thankfully they eventually came free without damage to any part of the weathervane or pinnacle. The vanes were then winched down on two ‘gin wheel’ hand pulleys.

Having studied the weathervanes in detail, James is of the view that the vanes were made at the same time as the clamp assemblies.  Although the iron has weathered and looks old, the bronze has weathered better. Looking at the flames on the forged griffon they appear to have been flame cut from sheet – identifiable by the distinctive edge quality. James comes from Evesham and was contacted by several people who apparently know the provenance and history of the weathervanes, we’ll update you when we know more.

James said of this project: “It’s good to be involved in a restoration project that has a connection with the place I grew up, and it’s satisfying to know that once the restoration is complete these weathervanes will  be here for another long period of time.”
The four vanes are now here in our workshop in Larkhall, Bath. They will now be flame cleaned and minor repairs will be carried out by our restoration team before they are re-gilded and returned to Evesham.

We undertook the restoration of a cockerel weathervane at St Mary the Virgin Church in Mudford earlier this year for Sally Strachey Conservation.

Ironart’s Martin Smith, and NHIG blacksmith Paul Ashmore, are pictured removing the cockerel from the church tower earlier in 2013. Paul was on a placement with Ironart through the NHIG (National Heritage Ironwork Group) and worked on this project alongside Martin (also pictured here)