Do you know that we create all sorts of different designs for garden furniture and garden structures that you can buy from our on-line shop?

Arches, gazebos, pergolas, garden seats, well and pond covers or more bespoke items like fruit cages or even unique sculptures. You can browse all the different types of structures that are available or search for inspiration to help with your garden design via our website.

Wrought iron arches, gazebos and pergolas are perfect as an elegant feature to frame a view, create a feature and as an integral part of the design of your garden. The solid construction of our garden arches will support climbing roses and plants and offer durability and strength for a lifetime.

We supply all metal garden structures in sections which easily bolt together using discreet halving joins. They can either be pushed into the ground or set into a solid base.

The Ironart team are a mix of highly skilled metalworkers and blacksmiths, a number of whom graduated from art college before embarking on a career in metalworking.  If you are thinking of commissioning a piece of garden sculpture, we’d love to hear from you. If you have an idea in mind and don’t see what you’re looking for on our website, please get in touch as we’d be happy to help with ideas. Almost anything is possible!

In terms of word of mouth, it’s great when a project we’ve worked on does the talking!

Back in 2013 we were asked to design, make and install a Dining Pavilion  – affectionately known as the ‘Onion’ – for The Yorke Arms ‘Restaurant and Rooms’, owned by Michelin starred Chef, Frances Atkins.

The beautiful structure certainly gained some attention in the gardening press and we were delighted to be commissioned by Bath’s Royal Crescent Hotel to make a similar structure as the centrepiece to the hotel’s new Wedding Garden, under which people would be able to exchange their vows.

“The wedding pergola was very much inspired by Frances Atkins and the ‘Onion’ and will be a beautiful focal point for the new gardens here at the Royal Crescent Hotel. Couples choosing to marry here will enjoy a very unique and special backdrop for their nuptials.”

And the pergola continues to speak for itself…

We were delighted to see the pergola made an appearance in an April 2016 issue of Hello! magazine. It can be seen peeking through the window of a hotel bedroom, where the magazine featured an interview with former Olympic swimmer, Sharron Davies. 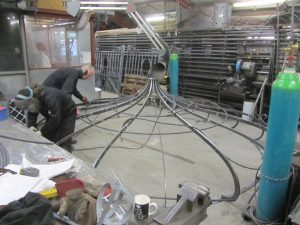 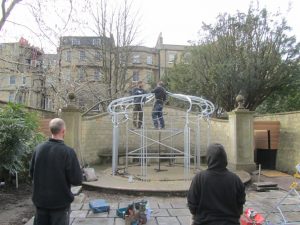 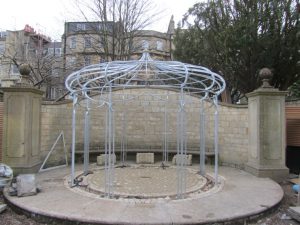 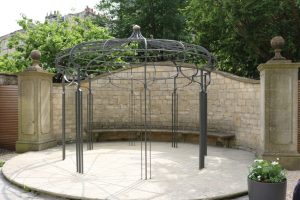 The beautiful Wedding Pergola complete and in situ 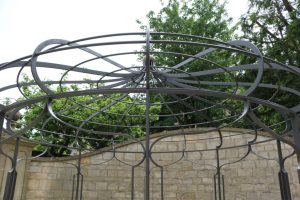 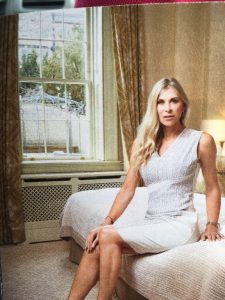 Look through the window…