We were recently asked to refurbish the railings at Wickham Road Cemetery in Fareham. Dating from around 1889, there are 24 wrought iron panels, each spanning six metres in length and totalling more than 140 metres of railing. 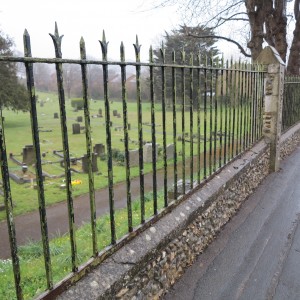 In recent decades the railings have had temporary in situ repairs made to them, one of which was the introduction of a mechanically fixed bottom rail to secure the vertical bars into the original stone, which had suffered from trapped water and the freeze-thaw process. 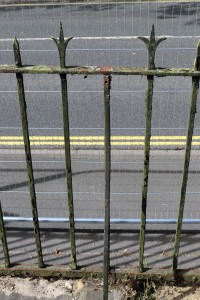 Originally the bars were individually fitted with the top strap in two pieces and a halving join in the centre. With this being the first time that the railings are being removed for more extensive repair, we had to release the original halving join, separating the bars into two panels and then cutting through the recently added bottom strap. 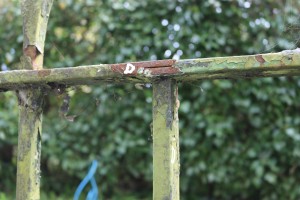 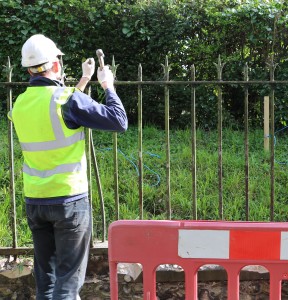 Preparing to extract one of the railing panels 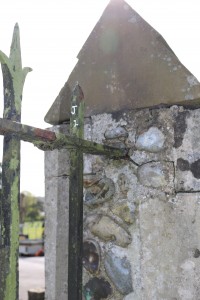 Fixings into the stone piers have been compromised

All of the bars are in fair condition considering their age but there is evidence of rust-jacking, especially around the bottom rail repair. It is also clear that the rust-jacking of the top strap has compromised the fixings into the stone piers.

We will be working to conserve the railings sympathetically; after trimming the bars to allow clearance under the panels and ensuring that trapped water and the freeze-thaw problem doesn’t reoccur, we will introduce a bottom rail of wrought iron. The railings will require cleaning, removal of all rust, repairs to structurally inadequate and missing components and finally re-painting.

PT Contractors are responsible for replacing all the stone copings and rebuilding the piers as necessary. The Real Wrought Iron Company will be supplying the wrought iron for the bottom rail. With the recent arrival at their workshop of over 30 tonnes of chain dredged from the bottom of Portsmouth harbour, we wonder if some of the chain may find itself back in the neighbourhood  very soon…