We have been working on some different Georgian canopy projects. The first is an unusual project. We’ve had parts of a Georgian Canopy in store for a few years, they had been languishing in the basement of a local charity The St John’s Trust and Ironart agreed to store it with a view to selling it on behalf of the charity to anyone that might have a use for it. A client in Devizes who is building a new house using all reclaimed materials is now using the columns and balustrading to create a feature balcony, we are adapting these lovely old pieces to fit this new project. The original pieces are in amazing condition with virtually no corrosion or rust, no doubt having been previously well maintained and then being stored at St John’s. There have also been debates in the workshop about how the Georgian ironworkers created such beautifully neat leaded half-lap joints with invisible seams.

The second project is from Sion Hill, Clifton in Bristol. We are repairing and restoring a large mid-Victorian balcony and canopy from this property. The original ironwork was created between 1845 and 1873. The canopy was in varying states of degradation because of its location with a perfect view overlooking Clifton suspension bridge but in full receipt of the weather from Clifton Gorge for the last 170 years. Now it has been removed and taken back to our workshop, all the paint has been stripped off revealing stamps of Abadaire Ironworks where it was originally fabricated.

It is a beautifully constructed piece, immaculately created and with perfectly fitting joints. The tenons that fit into the stanchion uprights have an incredibly accurate tight fit which impressed the team working on them. Many of the lead flower details and the cross-sections they sit on need replacing necessitating the creation of moulds of the original flowers in order to make perfect copies. Foot details have also needed replacing, this has been done using reclaimed wrought iron forged to match the originals.

And the third canopy project that we have just completed after 2 years in storage is a beautiful Georgian porch structure that we removed and restored in Bristol in 2018. This is the same property that we created an enormous new canopy structure for in the same year.  It is great to see this wonderful project finally complete!

We have just completed installation of this balustrade in a private house in Cambridge. It was no mean feat getting all those bars to line up with so much going on with all those angles and curves going on!

We made this balustrade for a private home near Henley in 2016. We have recently received the final images of it in situ. The balustrade was designed in collaboration with the project architect and was inspired by Sir John Soane’s Moggerhanger House.  Whilst it looks beautifully simple it was a deceptively difficult job with fiddly and precise ironwork. It’s great to see it in its completed setting.

Posting some pictures of a lovely curved handrail that we made for a farmhouse near Swainswick for Bath Architects Watson, Bertram & Fell and builders Donovan Construction.  A simple, elegant design made by James and Jason here in the Ironart workshops in Larkhall earlier in the year and fitted on site in several visits by Andy, Martin and Jason.

The bespoke timber for the handrail was supplied by Staffordshire based timber specialists Clive Durose. The finished stair rail has a really satisfying, intrinsic beauty, and the feedback we received from them put a big smile on our faces too… “We were very impressed with the quality of the metalwork, as was our fitter”

If you have a similar staircase project in mind and would like some advice, please give us a call because we’d love to help.

We made and installed this balustrading for a simple, elegant winding staircase in a private grade II listed mansion on the edge of Bath. Here’s a pic of Jason working on site.  The wooden handrail was the perfect finishing touch to this project. If you would like some advice about a similar commission, please give us a call because we’d love to help. 01225 311 273

Here are some recent pics of some balustrading we made and installed on a contemporary house in Saltford near Bristol last year. The house was being completely renovated and needed something in keeping for the front steps. Andy wasn’t the least bit constrained by the architecture of this interesting house, and his inspiration for this design was taken from a Scandinavian style wooden interior balustrade. Highly unusual and highly effective!

This weekend I revisited a project we completed a few years ago now, and had the opportunity to take some photos. This beautiful stair balustrade which incorporates cast panels was made for a Georgian family home on the edge of Bath. The wooden handrail has yet to be installed. Nice work!

We were recently commissioned to make up a sample panel for a bespoke balustrade. The design is based on hand forged oak leaves. We have yet to make the balustrade, but thought it would be fun to show you what the guys came up with. 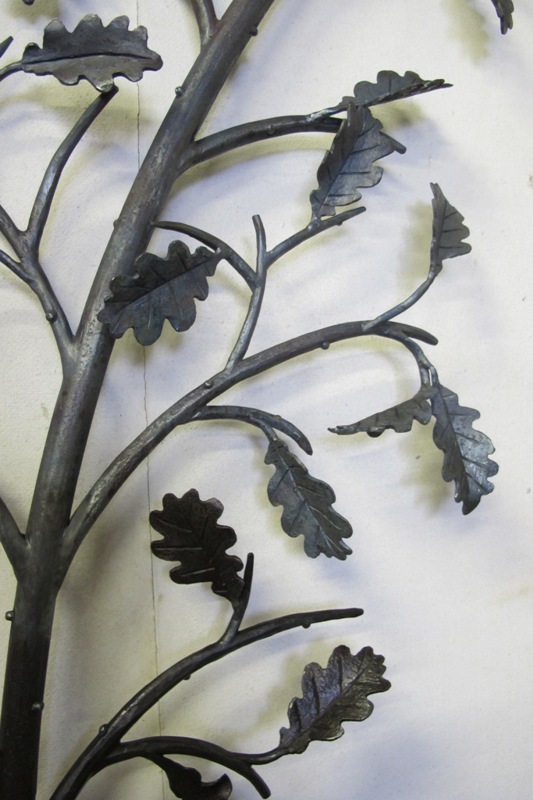