Eagle-eyed locals may have spotted us in the Bath Chronicle this week. We’re looking for a company or individual who would like a 12 month high profile branding opportunity and the chance to own this elegant sculpture. The ‘Sun Flower’ was designed by Ironart’s Andy Thearle and will be on display on the Bathwick Hill roundabout right in the centre of Bath from June 2014. The beautiful, dramatic structure is 4m high and 4m wide, and will be planted up by the Council’s Parks & Green spaces department in time for the Britain in Bloom judging in July. Bathwick Hill is on the main arterial trunk road around the centre of town. If you’re interested in discussing this project with us, please get in touch with Alice or Andy here at Ironart on 01225 311 273. 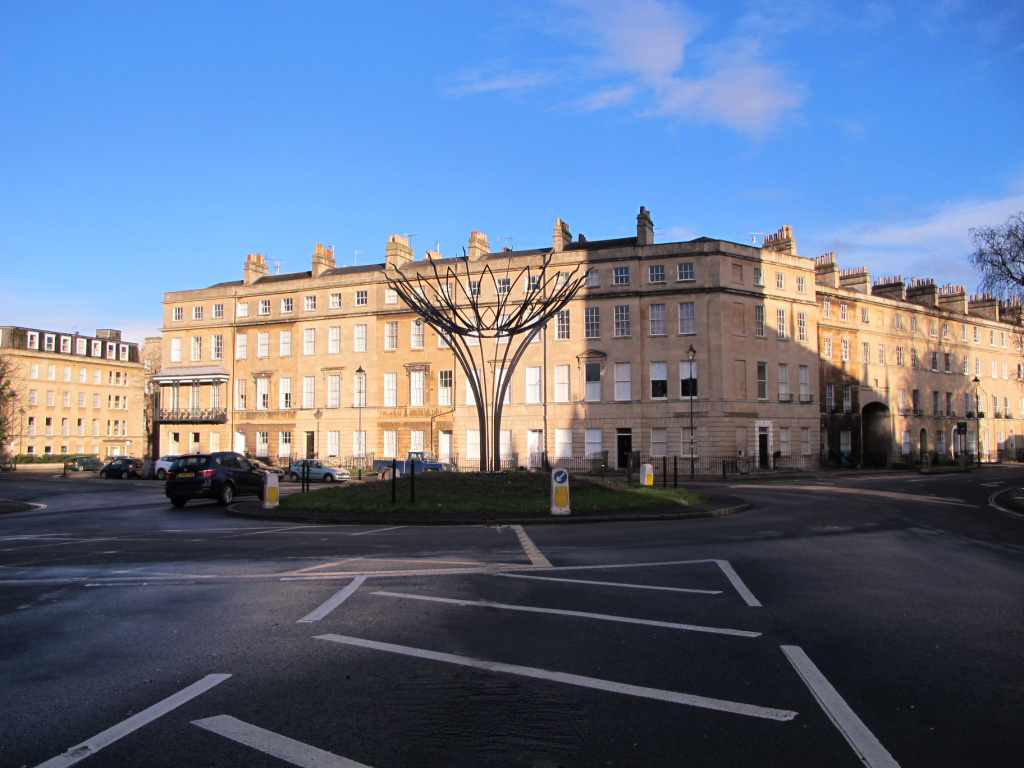 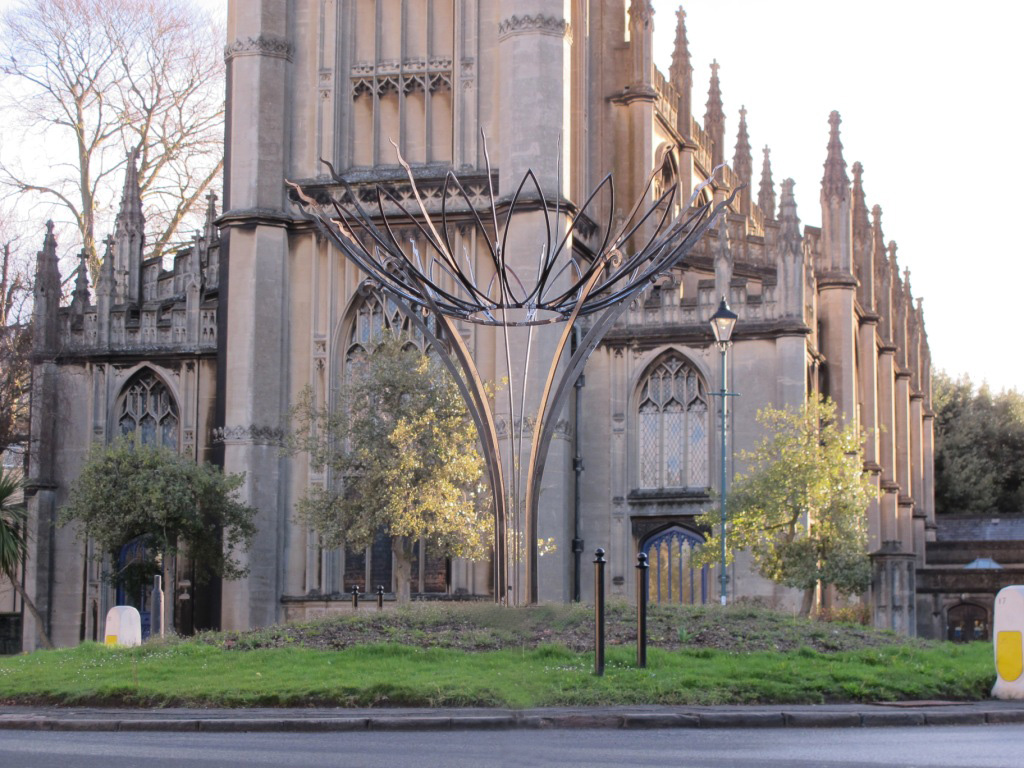 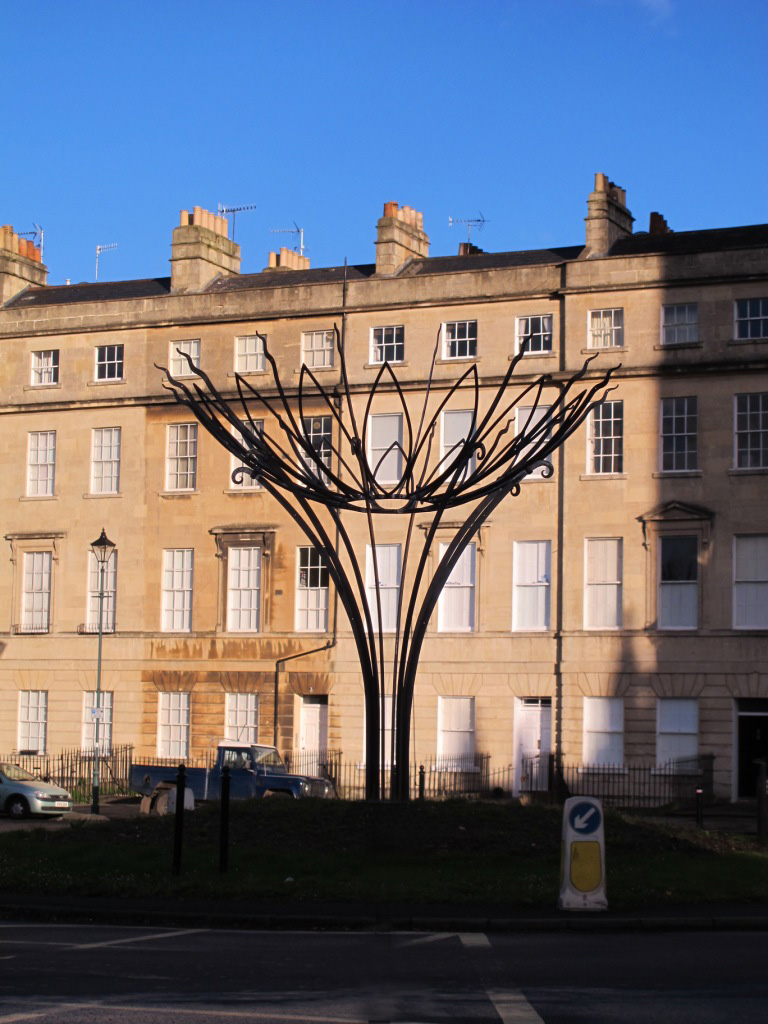 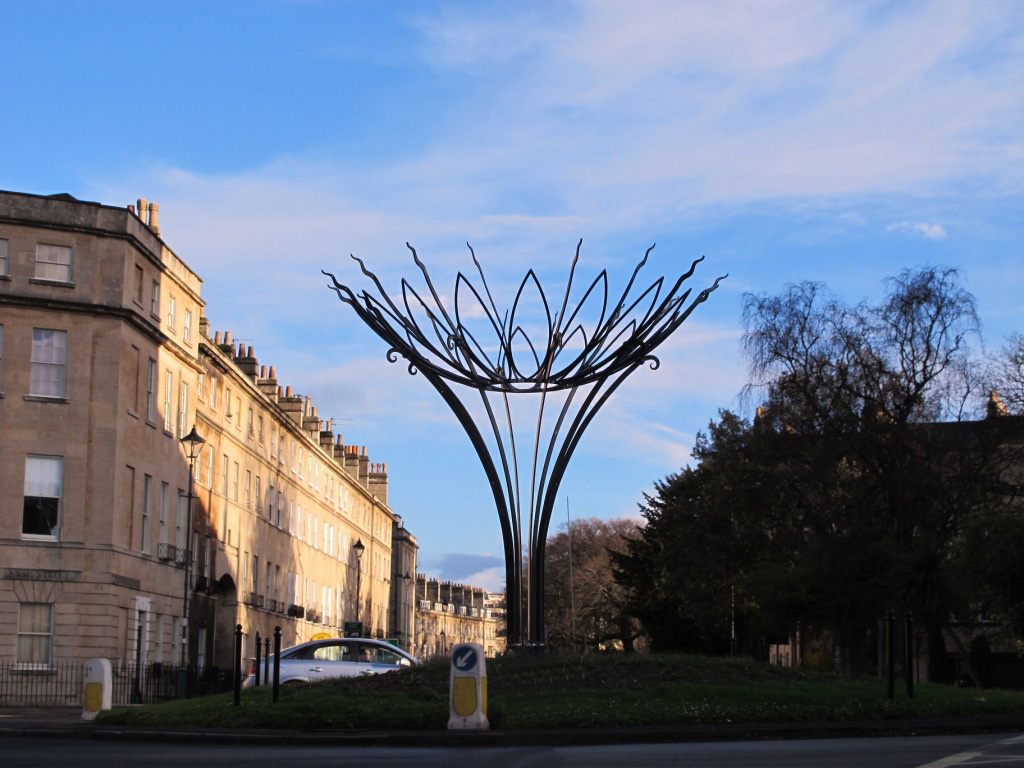 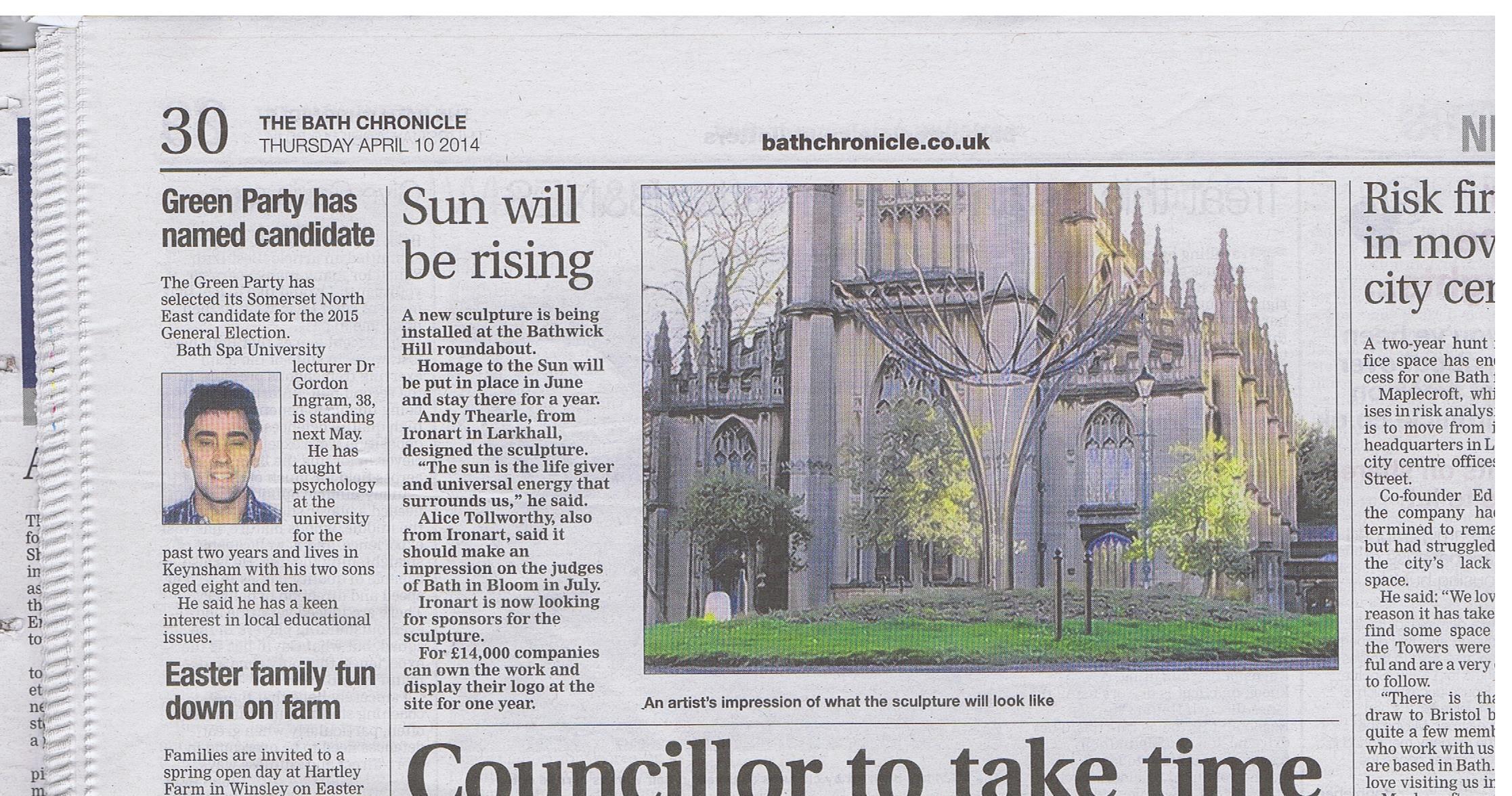 We made a pretty single gate with a scroll latch, and a short run of railings – in a ‘ball and sphere’ finial design for a customer in Brunswick Street, just around the corner here in Bath.

Metal gates and railings are the mainstay of our business and there are many, many examples of gates and railings here on our website. If you’d like to talk to one of the Ironart team about commissioning something, please get in touch because we’d love to help. 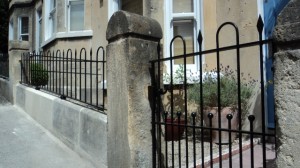 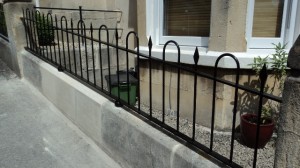 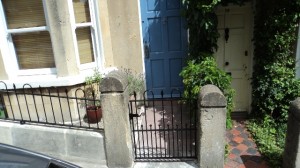 Three of our guys  – Jason, Jim and new apprentice James attended the BANES skills fair at City of Bath College yesterday in central Bath. The guys set up a mobile forge and gave forging demostrations throughout the afternoon. This was the first time a team from Ironart had attended the fair which was aimed at 15 to 19 year old school leavers, to give them an opportunity to explore potential skills and careers for the future. We’ve compiled a short document which gives advice to anyone looking to start a career in metalworking, please follow this link to download it:  Ironart’s guide to getting into metalworking

We are lucky enough to be based in the beautiful City of Bath, a World Heritage City, UNESCO added Bath as a cultural site to its World Heritage List 25 years ago in 1987. To commemorate this anniversary we were commissioned by Stephen Bird, Head of Heritage Services at Bath and North East Somerset District Council (BANES) to create a large-scale World Heritage Symbol. We were delighted to be asked to make this prestigious piece, an unusual metalwork commission for the Ironart team. The brand new World Heritage Symbol is located high up in the entrance to the Roman Baths in the Pump Rooms in the centre of Bath – you really cannot miss it! 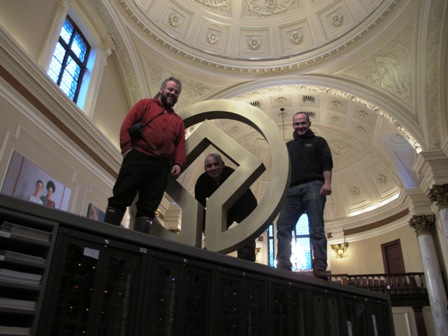 The impressive large-scale sculpture was fabricated from 2.5mm sheet steel which had been plasma cut to shape using a wooden mock-up of the finished article. We constructed it in a hollow box section and it was finished in our sprayshop in a satin gold paint before being carefully transported to site by the Ironart team.  Let us know if you visit the Roman Baths and spot it, we’d love to hear what you think!

We recently installed these elegant ‘Bath finial’ railings and a single gate on Prior Park Buildings in Bath. An elegant set of traditionally made railings can seriously enhance the ‘kerb appeal’ of your period property. If you are looking for wrought iron gates and railings and would like a no-obligation quote, we’d be really happy to help. Please take a look at the railings on our website, there is a huge choice of styles and give us a call on 01225 311 273 because it’s likely we can give you a ball-park figure over the telephone in the first instance.

These pictures just came in from the fitting crew, and we thought they deserved a special slot on our blog. They illustrate the installation of a full set of traditional wrought iron railings around the front of a Georgian terraced house in Grosvenor Place, Bath by the team at Ironart.  If you have a set of metal railings and would like a no-obligation quote to repair or replace them, please take a look at our website, and then give us a call on 01225 311 273 because we’d love to help.

We are over the moon that Bill and Frances Atkins are using Ironart garden furniture at The Yorke Arms.

Ironart at the Yorke Arms, Harrogate

Ironart at The Yorke Arms

The Yorke Arms is a world-reknowned ‘restaurant with rooms’ set in the jaw-droppingly beautiful Nidderdale Valley near Harrogate. We could write superlatives about our own wondrous eating experiences  at the Yorke Arms over the years but you probably wouldn’t believe us… so we’ve pasted some excerpts from some well known broadsheet food critics to do the job instead.

“Afterwards we take coffee with the chef/patron, as impressive as she is no-nonsense. Frances Atkins worked in Kensington in London, but found it poncey. She declares herself happier pottering about her organic vegetable garden, plucking raspberries to make jam. “In the kitchen we fight whenever the hens lay, the eggs are so good,” she says with a laugh. When I ask about her training she looks bemused; she is entirely self-taught. How many other holders of a Michelin star can claim that?”  Jasper Gerrard, 2008 The Telegraph

“Such was the quality of [Frances Atkins] cooking that the only sounds to be heard in the dining room (walnut tables, oak dresser, sub-Cézanne abstracts, seagrass flooring: all charming in a farmhousey way) should have been merry cooing and gushing. But the British diner is a tremulous beast; and while the Whispering Quotient peaked at a comparatively modest 57 per cent, it was still intimidatingly high. Atkins is one of a growing band of female cooks with a Michelin star, although why she just has the one is beyond me. Perhaps it is the reluctance of her warm and quietly expert staff to drive the punters mad with the obtrusive fussing that seems to delight the inspectors?”  Matthew Norman, 2011 The Telegraph

Happily for us Bill and Frances Atkins have recently added a new courtyard dining area to the Yorke Arms with four stunning new bedrooms. Andy travelled to Yorkshire to make and fit a new wrought iron external staircase in the new extension. The Ironart seating collection looks fantastic in such a prestigious venue, and we are very grateful to Bill and Frances for all their support to date.

If you enjoy good food… eat at the Yorke Arms because it is quite simply in a class of it’s own. If you have never been there, don’t waste another second dining anywhere else in the north of England – you won’t regret it!

We’re featured on the garden pages of the July 2011 issue of Country Living Magazine. This time the Contributing Gardening Editor Stephanie Donaldson has focussed on Martin’s skillful cast iron bench restoration work here at Ironart. Unfortunately they didn’t use one of our pictures, but the write-up is a real coup for us, and we’re really grateful to Stephanie for including it. 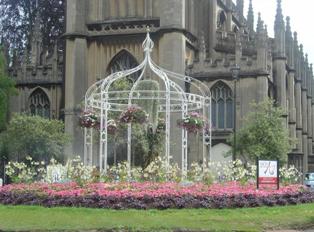 It seemed like the end of an era when the Ironart Gazebo (or Pergola – depending on who you speak to!) was disassembled and taken off the Bathwick Hill roundabout last week. It’s been in situ for two years. So many people have commented to Andy and the team that they liked it, and it certainly added drama to the elegant backdrop of  Georgian houses and St Mary’s Church.

The Bath Chronicle wrote a some editorial about the gazebo coming down, and we were delighted to learn that the American Museum will be exhibiting on the roundabout to publicise forthcoming exhibitions. Happily we were contacted by a member of the public almost immediately after the article was published who wanted to buy the Bathwick Hill gazebo for their private garden just outside Bath.  We want to say a HUGE thank you to the BANES Parks & Green Spaces department for doing such a beautiful job of enhancing the gazebo with beautiful planting throughout the seasons, and to everyone who gave us positive feedback – we’re glad you enjoyed it!

Well – all that hard work paid off and today the RHS judges at Malvern awarded us a Silver Gilt for the presentation of the stand. Apparently we could only have improved by a) relaying fresh turf instead of using the existing grass… and b) having a bigger stand! 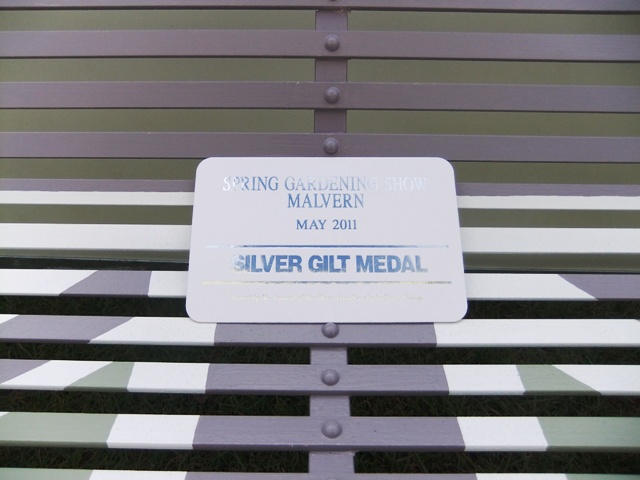 Thanks so much again to the entire team for all your hard work. We had heaps of great feedback from customers at the show today. Lots of interest in the Lansdown wrought iron benches, the gothic two seat wrought iron bench which sits within a pretty gothic arch and of course the big draw at the front of the stand – our amazing flower arch. 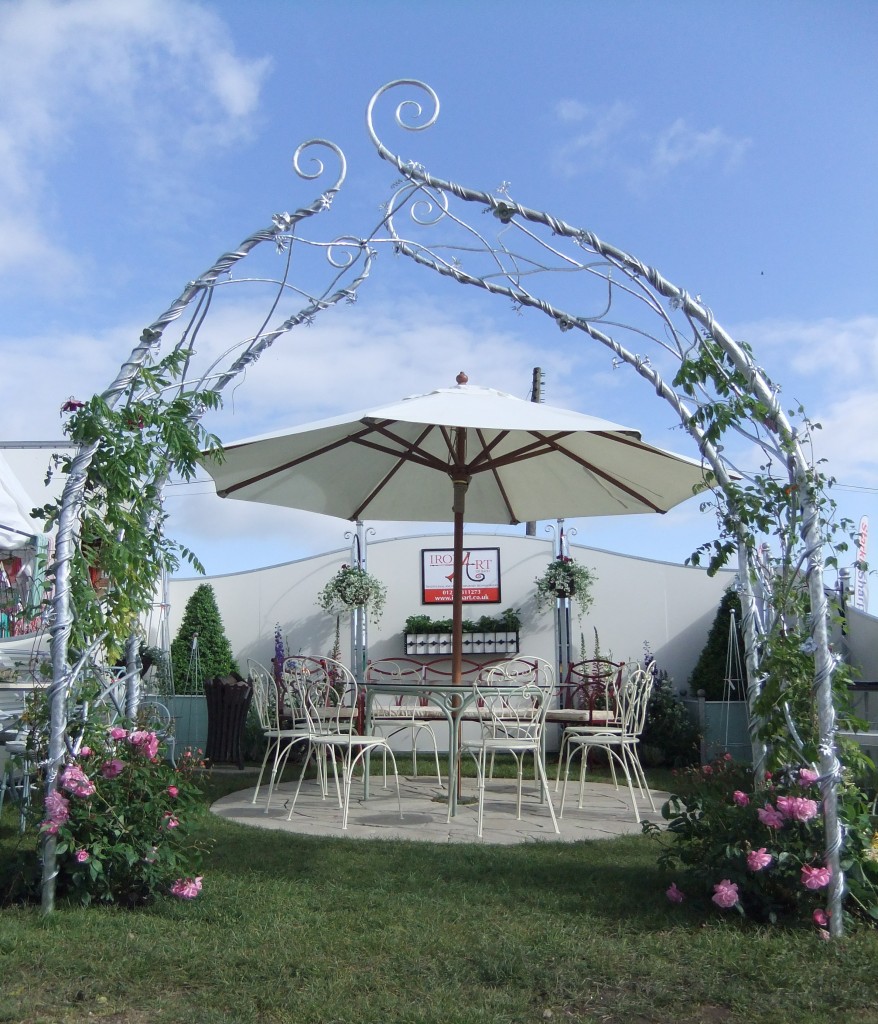