A huge well done and thank you to BABA – the British Artist Blacksmiths Association, who put on a fantastic show at their 2016 AGM and Conference, with their ‘Blacksmithing on the beach’ event in Hastings last weekend.

Featuring as part of the Root 1066 Festival , Hastings-based sculptor Leigh Dyer, in collaboration with BABA, produced a new piece of public art live at the event on Hastings Stade. The sculpture is inspired by the development of the English language through the integration of Norman French and the progression from a largely spoken to a written culture.

“It really was a fantastic event and great to see so many people – those directly involved in the blacksmithing craft but also so many members of the public – enjoying the scene. Seeing the sculpture take shape live in the form of a Norman longboat really drew the crowds and the kids loved having a go at the forging.” 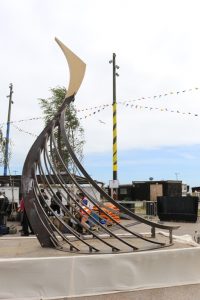 Blacksmithing on the beach 2016! 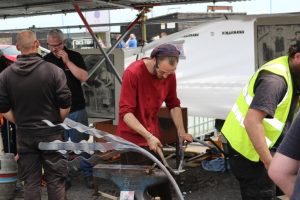 Blacksmithing at the BABA event