We had a great time at the Royal Crescent foundation stone celebration on Sunday.  Sunshine, sandwiches, plenty of willing helpers to pump the bellows and lots of nice people to talk to … And most importantly the opportunity to show how the finials on the Royal Crescent railings would have been made 250 years ago (except that perhaps the bellows wouldn’t have been quite so leaky).  James even had his moment of fame on BBC Points West! 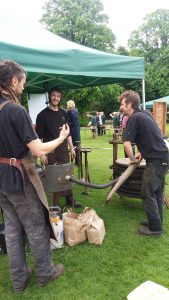 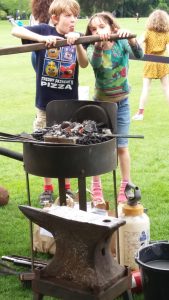 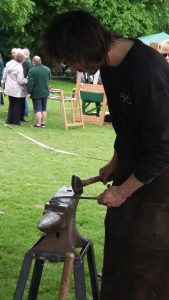 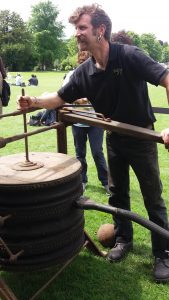 During the Bath Spring Flower show we were approached by Colin Clarkson-Short to ask if he could borrow the Ironart screen that Andy had designed and built for the shows this year.  Colin was co-ordinating a fundraising production of Shakespeare’s Much Ado about Nothing in front of the stunning Royal Crescent, in Bath and thought our screen would create a suitable backdrop for ‘The Garden Players’ to stage their open air performance. We were delighted to be able to help out, and last week Andy and Luke erected it on the beautiful lawns in front of the Royal Crescent to dramatic effect!

The Garden Players perform Much Ado About Nothing in front of the Royal Crescent, Bath

There were three open air performances over the weekend, with sell-out shows raising valuable funds for two charities: The Child Bereavement Charity and Children with Leukaemia. Each performance offered something slightly different, with good food and drink, entertainment, music, charity raffle and dancing under the stars. On the Sunday afternoon Colin and his wife Rachel Clarkson-Cooke extended an invitation to all for ‘Summer Serenade on the Lawn’. The screen looked fantastic and we were really pleased that the cast made good use of Ironart wrought iron seating with the gothic bench taking centre stage for most of the performance!